We utilize spin effects in chiral molecules toward next-generation spintronic materials and devices.

We study dynamic spin effects in chiral biological systems such as protein folding, biorecognition and self assambly.

We study quantum effects in biological systems. Specifically in the process of marine photosynthesis

Probing the Spin-Coherency in Chiral Systems

The quantum nano engineering group studies quantum biological effects and utilizes the concept in the development of advanced quantum devices.

contact us!
research topics
who are we?
Selcted Published Work

Separation of enantiomers by their enantiospecific
interaction with achiral magnetic substrates

It is commonly assumed that recognition and discrimination of chirality, both in nature and in artificial systems, depend solely on spatial effects. However, recent studies have suggested that charge redistribution in chiral molecules manifests an enantiospecific preference in electron spin orientation. We therefore reasoned that the induced spin polarization may affect enantiorecognition through exchange interactions. Here, we show experimentally that the interaction of chiral molecules with a perpendicularly magnetized substrate is enantiospecific. Thus, one enantiomer adsorbs preferentially when the magnetic dipole is pointing up, whereas the other adsorbs faster for the opposite alignment of the magnetization. The interaction is not controlled by the magnetic field per se, but rather by the electron spin orientations, and opens prospects for a distinct approach to enantiomeric separations.

As spins move through a chiral electric field, the resulting spin current can acquire chirality through a spin–orbit interaction. Such spin currents are highly useful in creating spin–orbit torques that can be used to manipulate chiral topological magnetic excitations, for example, chiral magnetic domain walls or skyrmions. When the chiral domain walls form composite domain walls, via an antiferromagnetic exchange coupling, novel phenomena, including an exchange coupling torque and domain wall drag, are observed. Here, we review recent progress in the generation and functionalities of spin currents derived from or acting on chiral structures. By bringing together advances in chiral molecules, chiral magnetic structures and chiral topological matter, we provide an outlook towards potential applications.

The electron’s spin is essential to the stability of matter, and control over the spin opens up avenues for manipulating the properties of molecules and materials. The Pauli exclusion principle requires that two electrons in a single spatial eigenstate have opposite spins, and this fact dictates basic features of atomic states and chemical bond formation. The energy associated with interacting electron clouds changes with their relative spin orientation, and by manipulating the spin directions, one can guide chemical transformations. However, controlling the relative spin orientation of electrons located on two reactants (atoms, molecules or surfaces) has proved challenging. Recent developments based on the chiral-induced spin selectivity (CISS) effect show that the spin orientation is linked to molecular symmetry and can be controlled in ways not previously imagined. For example, the combination of chiral molecules and electron spin opens up a new approach to (enantio)selective chemistry. This Review describes the theoretical concepts underlying the CISS effect and illustrates its importance by discussing some of its manifestations in chemistry, biology and physics. Specifically, we discuss how the CISS effect allows for efficient long-range electron transfer in chiral molecules and how it affects biorecognition processes. Several applications of the effect are presented, and the importance of controlling relative spin orientations in multi-electron processes, such as electrochemical water splitting, is emphasized. We describe the enantiospecific interaction between ferromagnetic substrates and chiral molecules and how it enables the separation of enantiomers with ferromagnets. Lastly, we discuss the relevance of CISS effects to biological electron transfer, enantioselectivity and CISS-based spintronics applications.

Spin, not shape, underlies a surprising new method for sorting biomolecules from their opposite-handed counterparts.

Thanks for your interest in our research. Get in touch with us for any questions or comments regarding our work and publications. Positions available for talented MSc PhD and Post-Doc students. We’d love to hear from you.

Read about our CISS effect research in Physics Today

Read about our chirality separation on Ynet (HEBREW) 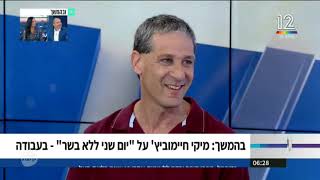